The View on the Way Down - Rebecca Wait 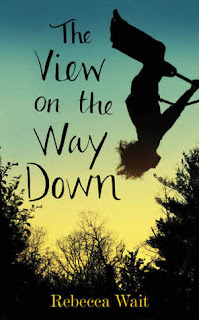 'He was fine some of the time, yes. But his mood could plummet at any moment. I wondered what that must be like for him.'

I was so very keen to read this novel when I heard about it. At the same time, I was very hesitant, because it deals with some things that affect me personally and that I strongly identify with. With this in mind, I did wonder how I would feel whilst, and after, reading it. The answer was that I was very moved by it and it did affect me, it made me cry and many times it made me think how astonishing it is, because the author has understood depression and has conveyed it as it is and can be; crippling, overwhelming, devastating, rendering a person so different from who they were and leaving those who love the person affected by it wondering what they can do. Aspects of the story were more close to home than I could have realised.

The story tells of Emma, of her brother Jamie, and her other brother Kit, and of her parents Joe and Rose. One of Emma's brothers died five years ago, and the other left the family home on the day of the funeral and hasn't been back since. Emma's parents haven't told her what actually happened, and neither have they spoken to each other about it. The immense impact of what has happened in the past is finally exposed as events in the present bring it out into focus for all of them. Emma is a lovely character who drives much of the story forward. I liked her and I felt for her. She is sweet and sensitive and is being bullied at school and can't understand why Jamie hasn't been in touch since Kit's death. This separation of the younger sister from her older brother with her not knowing why broke my heart. Her memories of time spent with her brothers are so important to her, but she has begun to question them:

'She clung on to memories like this, but it had occurred to her recently that perhaps they couldn't be trusted. If enough time went by, how could you be sure what was actually true and what you had imagined? Especially if nobody talked about any of it.'

It's almost impossible for Emma to bring up the subject of Jamie, and of Kit's death, with her parents, because of the extreme reactions it provokes. So she has been left alone with her thoughts about them both. Rebecca Wait captures so well the complexity and pain of the feelings of those left behind, not just of Emma but of Jamie, Joe and Rose. Jamie has a great deal to cope with, and I was incredibly drawn to him through the way he was portrayed. I thought the portrayal of the father, Joe's feelings, was also particularly well drawn and convincing in showing how difficult it was for him to try and deal with what had happened; quite simply, he hadn't been able to deal with it.

'...he did nothing, simply carried on as before. Head down, struggling through the days. Keeping going, getting through. He'd always known, without having to consider it, that there was no chance of recovery. Not for him, not for any of them. The passing years hadn't changed a thing. There was no getting over this.'

But I have written that the author has been honest and true in portraying this story and these people. So we know that doing nothing can't carry on forever, not without someone breaking or something having to give, and for them all to have to face what happened, at last. The conclusion felt right to me and I'm glad the story ended as it did.

The View on the Way Down is a beautifully written debut novel, and Rebecca Wait sensitively portrays painful, harsh truths about depression. But it remains throughout a compelling, vital story that the reader has to read to the finish.

This story is sad, tender, raw and painful but it is also warm and hopeful. It is heartbreaking, vivid and it feels very real. I felt so involved with this story as I read it, I felt the agonies of this family, I was moved by the characters and I found myself thinking about them after closing the pages. I read the book in one day; it's very rare for me to manage that.

Evidently Rebecca Wait knows the ins and outs of what she is writing about here; there were moments that I felt were so accurate, so heartfelt and true. It had a powerful effect on me to feel the strength and honesty in her words. It's an important story, told so, so well. The writing is light and understated and yet so incisive. The author has a deft touch whether writing about the everyday or the extreme.

So many sentences and passages stood out to me. There are moments that touched my heart and brought tears to my eyes because they were so simply stated yet so painfully true, such as the observation by Jamie's former girlfriend about the letter he once wrote to her; I will let you discover the details for yourself if you read the book. It made me think just how much the author has understood about people and life, how she has captured the reactions and realities that rang so true to me as I read.

One of my principal thoughts after finishing this novel was that it's so special to read a book that actually reminds you why you love reading so much. To read a book that you connect with, that takes you away from your world and into the lives of others, into a story that you are deeply moved by and compelled to read, but a book that, when you put it down and return to your own world, makes you feel that you are not alone in that world or not alone with your feelings.

I hope I have done this book some justice in my review. I think there is so much more I could say, but in the end all I can say is I thought it was an amazing, accomplished debut and please do read it.

I don't use ratings on my blog anymore but if I did this book would get 6 out of 5.

Thanks very much to the publisher for kindly sending me a copy of this novel to read and review.