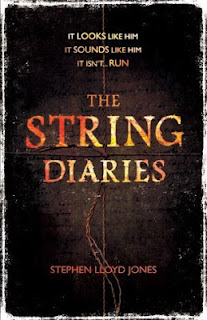 A jumble of entries, written in different hands, different languages, and different times. They tell of a rumour. A shadow. A killer.

The only interest that Oxford Professor Charles Meredith has in the diaries is as a record of Hungarian folklore ... until he comes face to face with a myth.

For Hannah Wilde, the diaries are a survival guide that taught her the three rules she lives by: verify everyone, trust no one, and if in any doubt, run.

But Hannah knows that if her daughter is ever going to be safe, she will have to stop running and face the terror that has hunted her family for five generations.

And nothing in the diaries can prepare her for that.

You can watch the trailer for this novel here and read the first chapter here.

Stephen Jones grew up in Chandlers Ford, Hampshire and studied at Royal Holloway College, University of London and is the director of a major London media agency. He now lives in Surrey with his wife, three young sons and far too many books. The String Diaries is his first novel. He is planning a sequel.

Giveaway - 3 hardback copies to be won!


The String Diaries sounds a very exciting debut novel indeed, doesn't it! It is released in the UK on July 4th 2013 and thanks to the kind folks at Headline I have three new hardback copies to giveaway!

To enter, please leave a comment on this post telling me if you do, or ever have, kept a diary, and how secret it was...

For an extra entry please follow this blog via GFC or Bloglovin' and let me know in your comment that you are a follower.

This is a giveaway for winners at UK addreses only please, as specified by the publisher.

***THIS GIVEAWAY HAS NOW CLOSED***

Thank you to everyone who entered. Three winners have been chosen at random and contacted, winners to be announced July 2nd 2013.