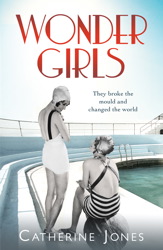 Wonder Girls by Catherine Jones, published by Simon and Schuster.

I am delighted to welcome author Catherine Jones to my blog! Catherine has kindly written a guest post about the background to, and inspiration for, her new novel Wonder Girls, as well as some thoughts on writing, and on life.

See below for your chance to win a copy of Wonder Girls!

What caught my eye about the picture of Edith Gertrude Parnell was the cut of her jib.
The first time I clapped eyes on her - a black-and-white shot in a local history book showing Edith standing on Penarth beach preparing to swim the Bristol Channel - she was looking at the camera with an air of watchful defiance.
Like all compelling images, the photo was more than a moment caught on film. It spoke of ambition, bravery, and breaking free, as well as a girl up-to-the-minute in a long-legged bathing suit, with her hair trimmed in a fashionable 1920s’ bob.
In time I discovered more about Edith.  In 1929, aged 16, she swam the Bristol Channel from Penarth to Weston-super-Mare, a distance of 11 miles as the crow flies but more than 20 when the treacherous currents are taken into account.

I started spending hours in Penarth Library, looking at back copies of the town’s newspaper where I learnt Edith, who grew up in the town, wasn’t the first to achieve this feat.
In 1927, 21-year-old Kathleen Thomas had become the first person to swim this notorious stretch of water – the first person, mind, not woman. All the men had failed!
I couldn’t let go of this pair of female go-getters, I found their courage so inspiring. Reading between the lines of old newspaper reports, it was clear nobody thought either of them would do it. Comments in the letters pages made the sense of disbelief plain. ‘Why is anybody giving this nonsense the time of day?’ was the gist of much of it.

This set me wondering what would drive young women in a small, Welsh seaside town to attempt such a daring trial. Fair enough, Penarth, five miles outside Cardiff, was known as a ‘swimming town’ with its Men’s and Ladies’ Swimming Clubs, an elaborately-tiled Victorian indoor pool on the promenade and regular galas where all the town turned out in its finery to see boys and girls race to the finish.
But the chill, grey Bristol Channel, with its currents and sandbars and history of death? What was driving them on?

There was more real-life derring-do too. In 1928, Amelia Earhart became the first woman to fly the Atlantic when she landed in Burry Port, fifty or so miles further west along the Welsh coast. When it came to women spreading their wings, there must have been something in the air in Wales in the 1920s.

These girls’ stories also chimed with several of my obsessions  – swimming, lidos, 1920s’ fashions, and women not being held back from doing as they pleased. In addition, what has long gone on inside my head is wanting to speak out on behalf of those who don’t have a voice.  Being all mouth and no trousers – not that I’m often caught in a dress – gobbiness has always come easiest on the computer screen, a make-believe version of speaking out in the safety of my own home.

Some days, writing Wonder Girls was like thrashing up and down a swimming pool. It needed stamina but I’d get somewhere. Other days, sitting at the computer was all about diversion. Should I eat the last French Fancy? I could even be reduced to putting a wash on if the weather fit for drying.
Other times I’d go to bed knowing I’d share the black and silence with my characters. I’d never written in the dark before – a strange feeling I’d recommend trying if you want to deliberately discombobulate yourself – but I’d lean down to the side of the bed for a pen and paper because, especially once the book told a real hold, I’d be lying there and Ceci, Ida or Freda would fill my head.
If it came easy or not, a walk along the cliff tops, looking at the choppy waters the real-life girls had crossed always sent me back to my desk determined to do them justice, for part of my drive to write this book was the hope they might take a 21st Century bow for their bravery.

What I like about being published – aside from the thrill of holding a beautiful 21.8 by 14.4cm hardback with a lido on the cover and fancy black-and-white endpapers – is hearing others come clean about their own ambitions.
‘I’m writing,’ they say, and when you ask a little bit more you see people’s  faces lift as they give voice to their story. It’s such a thrill to think the 1920s’ Wonder Girls helped me make a novel and now I’m hearing other women – and men – speak up about their own hopes.

One way or another, writers or not, we’ve all got our own Channels of ups and downs to cross, and keeping at it, carrying hope and a butterfly net to catch our dreams,  well, daft or soppy as it sounds, as optimistic old Ceci might say, ‘Ain’t that the only way to go?’

Thank you so much Catherine.

This link shows amazing footage of Edith Parnell, who Catherine mentions above, swimming the Bristol Channel.


You can read my review of Wonder Girls here.

WIN a copy of Wonder Girls!

I am really pleased to offer 10 readers the chance to own and read this wonderful book themselves! Thanks very much to the publisher Simon and Schuster for this giveaway. Winners will be announced on Monday 25th June. Thanks and good luck.

This giveaway has now ended, thank you so much for entering. Winners notified and mentioned on giveways page of this blog.