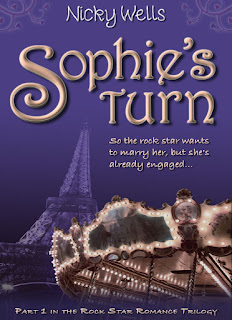 Sophie Penhalligan works on the news desk at the ‘Read London’ newspaper. She has been with her accountant boyfriend Tim for two years, and is hoping for their relationship to progress. The story is told in the present day, interspersed with flashbacks early in the novel, in which Sophie recalls an adventure in Edinburgh from her younger days involving a rock band she adored, called Tuscq, and her encouter with the lead singer Dan. Back in the present, a chance meeting with ex-Tuscq band member Darren at the airport sees Sophie learning that the band is now planning a comeback. When Sophie meets all the band once again, she realises on seeing Dan that her feelings for him are still strong, and this causes her to question seriously how she really feels about her relationship with Tim. Sophie feels that Tim 'was the best man any girl could ever wish for' and yet she has to admit to having a 'persistent weakness' for Dan.


Nicky Wells has written an enjoyable, light romantic novel with some entertaining comedy moments, and there is a palpable chemistry between Sophie and Dan! The first person narrative throughout means we are inside Sophie's head and in the midst of the confusion as to how she feels. At the worst point, she feels her life has become 'a tale of deception and lies.' Sophie is torn between the two men, and has to take time to decide what her way forward will be. Sophie has colleague and best friend Rachel to share the agonies and indecision of her love life with, and there is some lovely banter between the two friends. As Sophie spends time with the band on their comeback tour, she falls for the glamour and excitement of the lifestyle, 'the buzz before a gig, the exhilaration afterwards.' But is this where her long-term happiness lies? She has to face up to how she really feels, and decide what will make her happy.

The good news is that author Nicky Wells has decided this isn't the end for Sophie (see interview below) and we can look forward to more rock star romance and adventures very soon!

Thank you very much to the author for sending me a copy to read and review.

You can visit Nicky's blog here. Nicky is one of the writers featured in the loveahappyending project.

Interview with the author, Nicky Wells

In your novel, main character Sophie loves rock music. Are you a big fan, and if so have you always been? Did you/do you go to many concerts? 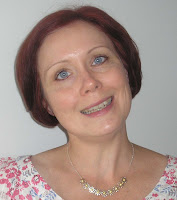 I love rock music.  I suppose I always have done, and I blame my brothers!  They are quite a bit older than me and supplied me with a steady diet of The Police, Pink Floyd, Queen and other assorted bands.  My first rock album ever was given to me by my older brother for my fourteenth birtday, and it happened to be Europe's Final Countdown!  I promptly went out and bought myself concert tickets to go and see them a few months later, and that was my first ever hard rock show.  I stood in the front row to the right of the stage, and I will never forget that feeling when the lights went off and the low bass drone for the opening of Final Countdown permeated everything in the hall.  You couldn't hear anything else, or think, or anything... but you could feel it all through your body! It was fantastic.

Since then I've seen an eclectic selection of other hard rock gigs, including Bon Jovi (several times), Europe, (at every opportunity), Dare, FM, The Darkness and Evanescence. There's nothing like a good hard rock concert to make you appreciate the power of the music!


The city of Paris plays a special role in the story, is that a city you are fond of yourself?

Do you know, I've only ever been to Paris once, on one of my first dates with my now husband (!) and I loved it. I loved everything about it, the charm of the quiet side streets, the hustle and bustle of the main shopping streets, the metro, the Eiffel Tower, the restaurants where we ate. It was truly enchanting. It is also a place I would love to get to know better one day...

Which three albums would be your 'Desert Island Discs'?

Can you tell us if you are writing at the moment? What are you working on?


Great question!  I am just in the process of writing the last few chapters of the sequel to Sophie's Turn!  When I got the end of Sophie's Turn, I realised that Sophie's story was far from over and that there were things I wanted to happen that hadn't... well, happened to her yet.  So I started planning the sequel, and it turned out that wasn't enough space either, so the whole thing is turning into the Rock Star Romance Trilogy.  Part 1 is Sophie's Turn, which you have already read (Thank You for your lovely review!).  Part 2 is nearly complete... featuring Sophie, Dan and Rachel (of course) and a few new characters.  There will be weddings and journeys and accidents and disasters.  Part 2 is a real rollercoaster of events with a couple of totally surprsing twists, and it will draw you deeper into Sophie's amazing story.  I am hoping to release Part 2 in the summer, probably in July or August.


What type of books do you enjoy reading?


I read so much, it might be easier to tell you what I don't particularly enjoy reading, and that would be science fiction.  I don't know why, and I used to love it as a child, but I can't get into it anymore.  Oh, and anything with blood and gore.  Apart from that, bring it on!  Favourite authors include (but are in no way limited to) Catherine Alliott, Jill Mansell, Sophie Kinsella, John Grisham, Su Grafton, Terry Pratchett, David Mitchell, Alexander McCall Smith... as well as loveahappyending's very own Jessica Strassner, Janice Horton, Stephanie Keyes and Bonnie Trachtenberg!  I am slowly working my way through the works of all the amazing authors in this group, and that will no doubt dominate my TBR pile for a few months to come yet!

And now for some quickfire questions...!

Countryside or city? City, I'm afraid (unless you include seaside in countryside, in which case, seaside, please!

Cinema or TV?  TV, because I can put my feet up and watch in my pyjamas.

Hardbacks or paperbacks or ebooks?  In my humble opinion, e-books are the way forward, but I do love flicking through the pages of a good paperback... And I miss the smell of fresh ink on paper in an e-book; perhaps that is something that the kind developers of e-readers might think about incorporating?

Pen and paper or computer? Computer!!!


Thank you so much for being a guest here, Nicky!
Posted by Lindsay at 07:01