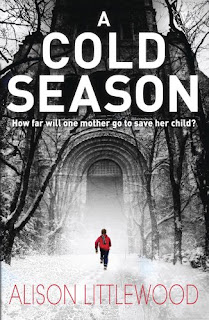 Cass has received the devastating news that her army husband Pete has been lost in Afghanistan. Crushed, she moves with her son Ben to the village of Darnshaw, where she spent some of her youth, to make a fresh start. The isolated nature of the location, reached via Saddleworth Moor, is conveyed very early on in the novel, as Cass is driving towards their new home and the landscape becomes a blur, disorientating, as heavy fog sets in. Already there is an element of tension, and as Cass starts to feel unsettled, so does the reader.
Their new home is to be the renovated Foxdene Mill. Upon arrival it becomes clear that they are the first new inhabitants there; the rest of the complex appears to be unoccupied, with some of it unfinished. As the severe winter weather worsens, so Cass’ feeling of isolation in Darnshaw intensifies. Phone lines don’t work anymore, no post is coming in or out, and any communications outside of the village are seemingly impossible. Ben is able to attend his new school though, and there Cass meets some other mothers and the new headteacher, Theo Remick. Strange, unnerving events begin to occur, and Cass tries to rationalise these, and puts it all down to them being new, to Ben being uprooted, but she sees shocking changes in her son and his behaviour. To go much further into the story may be to reveal plot that is best discovered by readers for themselves.
This is a tense, nervy horror story with some weird goings-on. It’s outside the genres of fiction I usually read and beyond my comfort zone but I really wanted to read this one. The isolation, the weird and eerie atmosphere, and the tension, is all built effectively, and the growing fear and uncertainty within Cass is conveyed very well. I was on edge whilst reading parts of this novel, and I didn’t want to read it in the dark! There are some grim discoveries and the isolated village and its’ inhabitants hold many dark secrets. A lot of the tension is the thought and suggestion of what may happen, or what you imagine might be the case; it’s achieved nicely in this author’s first novel. The reader needs to be able to suspend disbelief at some of the goings on, and at times I wanted to make Cass act differently, faster somehow.  I was compelled to finish it.
3.5/5
Posted by Lindsay at 08:00