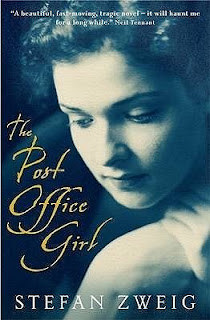 ‘She has begun to find out who she is, and, having discovered this new world, to discover herself.’

Christine Hoflehner is the post office girl of the title, working in a village branch in Klein-Reifling, Austria, in the years after World War One. Her days are identical, each spent working away at the post office, just earning enough to make ends meet, and then returning to the small home she shares with her ailing mother. There is the constant awareness of most things being ‘too expensive’, of having to scrimp and save to survive.

Then one day an unexpected telegram arrives from Christine’s American aunt, a wealthy woman, inviting her to stay with her and her husband at a resort in the Swiss Alps. Not having had a break, let alone a holiday in years, after initial fear and apprehension Christine accepts the initiation. Traveling to meet them she is painfully aware and self-conscious as to her appearance, but as the journey goes on she becomes aware of the sights outside the train carriage window, and it dawns on her, with joy and surprise, that there is a whole world which she has never seen.

‘Indifferent and without desires before, now she’s beginning to realize what she’s been missing….This is her first glimpse of the unimaginable majesty of the Alps, and she sways with surprise…if not for the accident of this journey, she herself would have died, rotted away, and turned to dust with no inkling of their glory.’

Her stay at the resort with her aunt and uncle will irrevocably alter her life. She discovers a world of luxury, freedom and pleasure, surrounded by pretty clothes, beautiful interiors, exciting people, and she is intoxicated and totally swept away by it all. There are none of her usual worries about lack of money, of boredom and routine; everything is new and exciting, the world is there to be discovered, people to meet and places to see. She undergoes such a change in all aspects of her life; it is like a real Cinderella story, from rags to riches.

On waking on her first morning in the hotel, ‘she looks and around and remembers everything – vacation, holiday, freedom, Switzerland, her aunt, her uncle, the magnificent hotel! No worries, no responsibilities, no work, no time, no alarm clock! No stove, no one waiting, no pressure from anyone: the terrible mill of hardship that’s been crushing her life for ten years has ground to a halt for the first time….She feels self-confident and happy as never before.’

Suddenly having to return to her former life, to her job at the post office, to wear her old clothes again, to return to the village, having tasted this alternative, leaves Christine utterly devastated and ashamed. Looking at her old clothes in the hotel wardrobe, the language conveys how disgusted and black she feels about them and the life they remind her of; ‘the hated blouse she came in, dangling there as white and ghastly as a hanged man.’

Back in Klein-Reifling, ‘everything hideous, narrow, disagreeable about this little world she’s been pushed back into digs in its barbs until she can’t even feel her own pain.’ A chance meeting with an old friend of her brother-in-law in Vienna one Sunday, someone with whom she feels a common bond, will shape her life going forward.

What a moving, emotional novel that sees the human spirit briefly reach such happiness and then return to such deep despair, driven by a glimpse of what wealth can offer and dragged down by grinding poverty in the post war years. I feel the author has captured the drudgery and monotony that can overshadow a life, as well as the potential beauty. He has so convincingly demonstrated, through Christine, the highs and lows of capitalist society, and how this can affect one woman’s life. I felt such sympathy for her, having her hopes for a different life so suddenly raised and just as suddenly shattered.

The language is beautiful, the story compelling, and the pain palpable. This work was found after the author’s death by suicide in 1942. I would highly recommend it.

I'm so glad that German Literature Month has meant that I finally read this novel.

Published by Sort of Books

I bought my copy of this book.