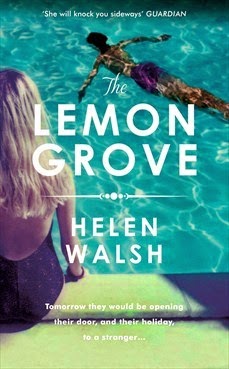 Jenn and husband Greg have already spent a week on holiday at Villa Ana near Deia in Mallorca, a place they've visited often, a blissful location nestled amongst lemon groves. They are staying a further week, with Greg's fifteen-year-old daughter Emma, Jenn's stepdaughter, flying out and joining them. Having pleaded with Jenn to intervene with Greg and persuade him, Emma now has her boyfriend Nathan, 17, accompanying her. Jenn expects the atmosphere and dynamic to change when they both arrive, and it does; Nathan's presence affects all three of the family members.

'...they would be opening their door, and their holiday, to a stranger - and no matter how much she tries to tell herself she's done a good thing, Jenn simply cannot shake off her misgivings.'

This story picks you up and takes you away, transporting you to sunnier climes and allowing you to be an observer as a woman grapples with the temptations of youth and desire, the quandaries of being a stepmother, with ageing and the joys and irritations of a long-term relationship, these latter suddenly being brought sharply into focus for Jenn.

I found the relationship between Jenn and Emma intriguing. We know that Emma and Jenn have shared closeness in the past, but things can sometimes be strained between them, never enjoying the same bond as Emma and her father. It's quite telling when we read that Emma only refers to Jenn as Mum now 'when she wanted something.' And it's hard to see this little girl become a woman, aspects of her so adult, so full-formed, yet sometimes there are reminders that she is not yet an adult. Jenn is torn between her role as a mother, as a wife, and her desire and thrill at being thought so desirable by Nathan, so that 'she is neither here, not there.' Nathan is young, confident, physically attractive, and Jenn experiences longings for him that she cannot fight, not when they are reciprocated, and illicit sexual encounters between the pair ensue. As well as passion and gratification, she experiences conflicting emotions; guilt, envy, and bewilderment at how she can have acted as she has.

I didn't find any of the main four characters overly endearing, indeed they are all flawed, but if anything this made it more interesting observing them and their weaknesses and mistakes. I was excited and anxious as to whether Jenn and Nathan would be caught in the act. I found this a fairly quick read, I was drawn in, wondering what would happen, and what the consequences would be. I could never quite picture Jenn, or decide exactly what she looked like, in my mind, the same for Greg. I don't know if this was deliberate or my failing. I've never been to Mallorca but Helen Walsh conveys the setting, sights and atmosphere of the place where the family stay so that you can imagine this backdrop to these events, the sea, the coves, the restaurants, all really nicely evoked. This sun drenched setting almost seems to add to the temptation for Jenn to abandon her restraint and duty, and follow her desires; the climate and the tension both sizzle at times.

I very much liked the note on which the story ended; often I like stories that are all sewn up but here, the way it was left, with both the characters and the reader on a precipice, was exquisite. It is perfect for reading on a hot summer holiday, but it's just as interesting to read wherever you are; the descriptions transport you away and the exploration of human fallibility, desire, temptation and regret is well done and makes for compulsive reading.

Published by Tinder Press, an imprint of Headline
Posted by Lindsay at 09:00