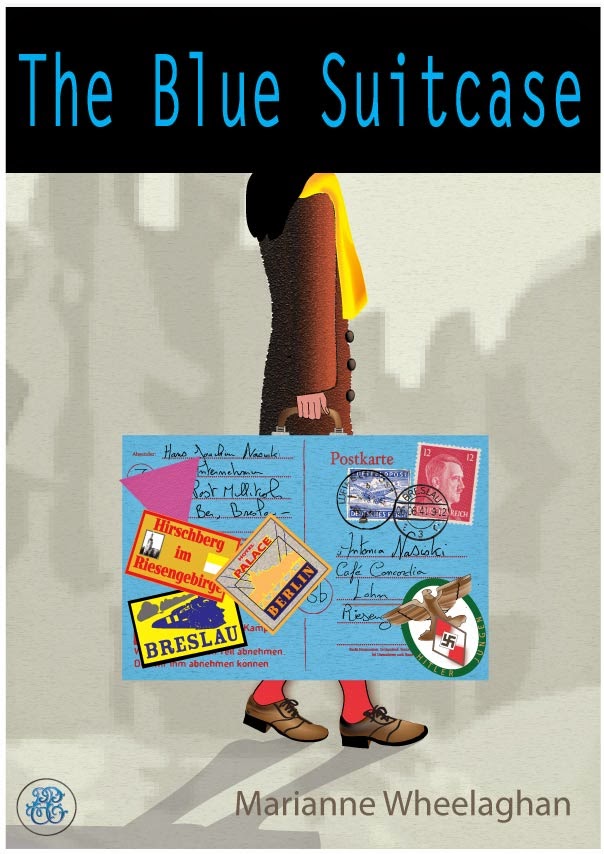 'Everyone is on edge and scared - scared to say what they think, and scared of what might come. Those not killed by the bombing are collapsing in the street from stress and anxiety.'

The Blue Suitcase is a fictional work that was inspired by actual letters and diaries which the author Marianne Wheelaghan found amongst her mother's belongings after her death, and it tells the story of a teenage girl growing up in Nazi Germany. The author writes in her prologue:

'I discovered the story of a vital person, who endured a shocking history, and this is why I have translated everything and put it in book form here. Simply put, her story deserves to be told.'


Written in the form of diary entries by the central character, Antonia Nasiski, as well as letters between her and members of her family, with some entries just a few lines long, others several pages, this is a moving, honest account of several years in a girl, and young woman's, life before, during and after World War II. Antonia lives in Breslau, in what in 1932 was the Province of Silesia in Germany, and is now an area within Poland. The story follows Antonia's life through the 1930s and 1940s, and charts the political and societal changes happening around her and her family, and the way these affect them all.

It's a frank record of turbulent times, when there seemed to be a strong answer to a country's problems but which turned into an horrific, destructive regime. And here is the voice of a girl, growing into a young woman as all this happens, recording her thoughts, her feelings, her reactions, what happens to her and those around her.

I started reading and felt that the child's voice felt authentic and believeable; her observations suit the age that she is at - nearly twelve in 1932 when the novel starts - with sibling rivalry and jealousy, childlike hope, happiness and indignation at things she sees as unfair. She mentions the changes happening in the world around her, most affected by the fact that the events are causing her family to argue all the time. Antonia's Papa, who was initially not keen on the new leader, remarks that 'All Hitler is trying to do is gain stability. If anyone can hold Germany together, he can.' To which his wife replies 'What's gaining stability got to do with locking up my son and raiding bookshops?' And so we hear about the wonderful authors whose books have been removed from the shelves. Twelve-year-old Antonia witnesses all of this and writes 'I wish they would stop arguing!' This conflict represents the divide between those who believe the changes may be for the better and those who are uneasy or angry about what is happening to their country. It's hard to read about this period of history without thinking about the horrific outcome, but the author portrays here how, at the time, some people were swept up and deceived by the force of change.

Through her diary recording her daily life, including the disagreements between her family, we see the implications of the large scale political changes as they affect one group of ordinary people causing divides and unrest. She writes of the dramatic things that happen to her family. She sees her brothers torn between the extremes, Hubert loyally following Germany's new leader, Hansi sympathising strongly, later to his cost, with the communists. I thought the positions taken by her two brothers, and the paths they followed, made for a very interesting contrast within the story. Her sister Maria is unable to fulfil the ideal role of a mother that society wants her to be. Through Maria's letters we learn of the bombing of Berlin. It was sad to read how Antonia's mother becomes a shadow of her former self.

The situation grows desperate and frightening for them all. In April 1945 Antonia writes of the way the people are being treated now by the German authorities; 'They terrorise and bully us and don't care if we live or die. How did it come to this?'  She has grown up through such tumultuous times, seen so much distress, we observe the way she has to mature, just to cope, going from a girl who just wanted an enjoyable birthday celebration without arguments at the start of the book, to a woman desperately trying to survive in a city turned to ruins, seeing what was her homeland disappear. I felt the terror and fear as people were ordered to leave Breslau.

There is so much change, so much suffering and sadness as their lives become more and more difficult, and it's a battle to survive. In taking as its focus ordinary German citizens, this novel tackles an area not always broached in WWII fiction, the author illustrating how war affects people on all sides. I'm reminded a little of the conflicting empathy I felt whilst reading other novels such as The Undertaking by Audrey Magee and The Aftermath by Rhidian Brook.

The writing style, presenting the events day by day and with such a frankness and at times factual tone, yet showing the very personal effects they have, makes the novel very readable and shocking at the same time. Marianne Wheelaghan has taken the personal documents she found, part of her own family history, and combined this with historical research to create a compelling, frank portrait of ordinary people living through a period of huge change and terrible destruction, people surviving at times through awful conditions and changed irrevocably during those dark days. This isn't always easy reading, at times it is uncomfortable and harrowing, but it is fascinating, thought-provoking and hard to put down, I was eager to know what happened to Antonia and her family. I liked the representations on the suitcase on the book cover of the journeys which Antonia makes.

Thank you to the author for kindly sending me a copy of this novel for an honest review.

There's more information on the author's website about the background to writing this novel.