Someday we'll tell each other everything - Daniela Krien 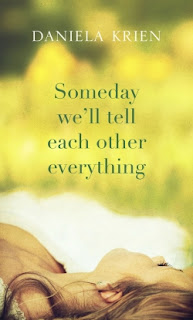 ‘I think about my own secret and realise that there are things which can be said straightaway, others need time, and some cannot be told at all.’

I was keen to read this book as I love stories set in Germany, in particular those set in the recent past. It’s the story of a sixteen-year-old girl, Maria, becoming awakened to adult life and experiences. It is set in summer 1990 and the period just after, in the GDR, which will soon be the former East Germany; the Berlin Wall having fallen, and reunification of the country fast approaching. Maria has moved in with her boyfriend Johannes, and the rest of the Brendel family, living quietly in the countryside. Maria has dropped out of school and escapes into books; her thoughts return several times to the book she is reading as the story unfolds – The Brothers Karamazov – and she draws parallels from this tale and events in her own life. One day she meets Henner, an older, damaged man, and the two embark on a passionate, unpredictable love affair.

It is a time of exploration and desire in Maria’s life, and the author captures this first passionate, at times violent, love, the need she feels for Henner, the impression he has made on her. ‘I can feel Henner’s hands – coarse, gentle, brutal, expectant – and I long for them…’ Maria is insightful enough to realise that this affair will impact deeply on her. ‘A life can be changed by a single moment.’ She is discovering her own identity day by day. ‘I’m not the same girl I once was. But who am I?’ She feels the strength of Henner’s desire for her, and it is a contrast to her relationship to Johannes now; though she thinks he loves her, his real passion has become his photography, and she things he ‘doesn’t see me any more, all he sees is pictures.’ She has a conscience; she acknowledges to herself that the lies she is telling and her actions in deceiving the Brendels are bad. She suspects that old Alfred knows everything and will expose her eventually. I felt a tension building in the story as the affair gathered momentum and I was compelled to find out what would happen. I was shocked that she had this affair and was still living all the while with her boyfriend and his family, yet I could believe it.

Just as events are tumultuous for Maria, so the country around her is unsettled and changing. The fascinating times and momentous changes in Germany then are not just a backdrop; Daniela Krien incorporates this nicely into her tale and into the characters’ lives, and it is all the more authentic bearing in mind that the author grew up in the East herself. Initially we learn via Maria that the fall of the Wall and the events surrounding it ‘went practically unnoticed here on the farm. They stared at the television pictures from Berlin as if they were from another country.’

As time moves on, there’s a moving reunion as a relative unseen for many years visits the Brendels from the West, and a couple of characters take a trip into the West too. Perhaps unsurprisingly, for the elder lady of the family, Frieda, the trip to the West is difficult and unsettling. For Maria and Johannes it is an adventure to head to Munich; only Maria’s second trip to the West. Her observations come thick and fast, impressing her, then leaving her feeling unsure about it all; ‘The sounds and smells of the West are different….I stare at people. It’s so different here, so self-confident, so assured, so hard to describe… I’m holding a tiny notebook. I’d planned to write down the things I saw that were new to me, things I’d sometimes longed for. And now I realise that everything is new to me, I’d have to write it all down: the smell of the shops, the cleanliness of the streets, the bright facades of the houses, women’s fashion, the excellent coffee, the beauty of of the women here…I don’t write down anything and suddenly my heart feels heavy.’ For Siegfried, Johannes’ hard working father, it is an enlightening, eye-opening experience to discover the different farming methods and structures in the West, and he returns to the East with his mind overflowing with ideas for improvement on his own farm.

The author has written an intimate first person narrative that drew me in to the story and held my interest. The style of writing, the spare prose, suits the tale, and the translation captures it all so well, and reads very smoothly indeed. I hope it will reach many more readers thanks to being available in English. I was intrigued to find out what Maria would do, and how things would develop. She can fall back on her unhappy mother only so much, and her absent father has caused much pain in her life. It seems unusual that she has moved to live away from her mother, but the way of life with the Brendels is happier and more structured and she grows fond of Johannes’ family, helping them and becoming more and more involved in the duties on the farm and in the shop, and also learning some of their secrets. Daniela Krien nicely portrays the happy domesticity and hard work on the farm, and there is a strong sense of place in the book..

Though not a long book, this was a very satisfying, thoughtful read, which made me pause and think from time to time. It didn’t need to be any longer, for me. I felt I got a sense of all the supporting characters, but all were just that; a well drawn supporting cast for a dramatic period in Maria’s life. I thought this was a super story and a remarkably promising debut novel, so much encapsulated into under two hundred pages that really captured the passion, excitement and discovery of love and desire in a girl on the cusp of womanhood, when emotions are heightened. Maria felt real; a dreamer, a helpful hard working girl, conflicted and flawed, lying and feeling guilty and torn, and all the more convincing for being so rounded. I would say this is definitely an author to watch.

Thank you to the publisher for kindly sending me a copy of this novel to read and give an honest review.

This is another read for my 2013 Translation Challenge hosted by Curiosity Killed The Bookworm.
Posted by Lindsay at 08:00