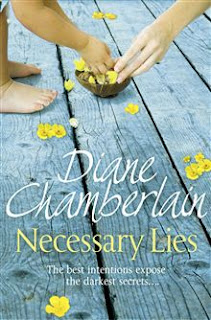 Necessary Lies has a period setting in Grace County, rural North Carolina, USA in 1960. Newly married Jane Forrester controversially embarks on a career as a social worker, whilst most of her contemporaries are stay-at-home wives and mothers. Ivy Hart is a fifteen-year-old girl living and working in harsh, destitute conditions on a small tobacco farm, caring for her aging grandmother and older sister who has a small child; on top of this Ivy copes with epilepsy. Ivy’s family is one of those that Jane is tasked with supporting through her social work, and Jane quickly finds herself caring deeply for them. When she discovers secrets about them and those around them, she is left with impossible decisions that will change all their lives forever.

Diane Chamberlain gets to the heart of human relationships in her writing; she paints an honest, bleak yet never hopeless portrait of the times and the people, incorporating terrible truths into her novel – Grace County may be fictional, but the enforced sterilizations, racism and distaste at a woman having a career are certainly not.

She delivers a heartbreaking storyline in short chapters alternating between the two distinctive, compelling first-person voices of Ivy and Jane, illustrating the clash between the two vastly differing worlds they inhabit; Ivy’s poverty versus Jane’s comfortable middle-class existence. Yet despite their different backgrounds, the two young women find similarities in one another and share the same hopes as they fight for what they think is right despite the strongly opposing views of others. An important and gripping story, told with honesty and sympathy.

Originally reviewed for We Love This Book online book magazine.

Thanks to them and the publisher for the chance to read and review a proof copy of this novel.

You can find the author on twitter @D_Chamberlain and visit her website here.
Posted by Lindsay at 08:00