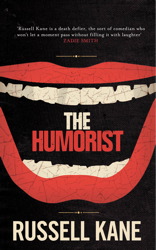 I have to admit I had never heard of Russell Kane before reading this book, but the plot line intrigued me greatly.

The question is: can laughter be made to kill people, a lot of people, all at once?

This book is packed with very black humour which turns in the end to horror, but it is more than that.

The narrator, Benjamin White, was born without the ability to smile or laugh; in fact when he was very small other people's laughter caused him actual pain and he had parents who laughed a lot. He would play, cry, eat and interact but he could not laugh.

Put through a special school to help him come to terms with his condition, he lives as an adult writing reviews on comedy and comedians, which are later put into acceptable terms by a co-worker, because though he cannot react to it personally he has a vast and analytic knowledge of the workings of comedy. Naturally, most comedians hate him as his reviews almost invariably rubbish them.

His life is mainly solitary, he has no real friends and sees as little as possible of his family, though he has been in love since childhood with his cousin Becky. He can feel love, but the love he feels becomes increasingly twisted. Documents fall into his hands that suggest that laughter can be made to kill by a series of movements and actions, rather than words alone. He is sceptical but fascinated and his quest leads him to Africa, where his conviction that content more than presentation is the root of comedy is challenged and overcome.

He makes the decision to perform his routine to a packed house at the Comedy Store, Leicester Square, following up a successful previous attempt. The place is packed out with people willing him to fail.

You cannot help but feel sympathy for Benjamin; he discusses his own case candidly and without too much self-pity, and even as the story descends into horror, I found I was still rooting for him. The other characters; his family, his workmates, are fleshed out as far as his limited imagination can paint them, and I felt sorry for some of them too. They did not understand Benjamin, and he had no way of understanding them.

As a dark story of the workings of comedy this book comes off very well; it made me think and even rush to look up things.

I've read reviews of the author's actual comedy and it doesn't appeal, but I hope he will write more fiction.

Guest reviewer Penny Waugh has kindly reviewed this novel for The Little Reader Library - huge thanks to Penny for this insightful review. Penny is a very keen reader whose reviews I always enjoy reading, and she is part of the ReadItSwapIt website.

Thank you to the publishers for the opportunity to read and review a proof copy of this novel.