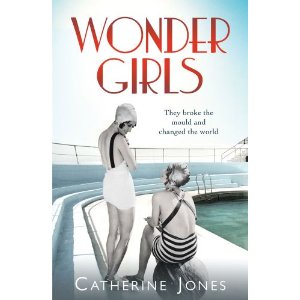 'You never know, it might be the start of something,' Ida said. 'Showing people what we can do instead of being told what we can't.'

It is 1937, and this novel opens with an episode during which we meet fourteen-year-old Cecily Stirling cleaning up in a maternity hospital in London, when she is asked by Sister to take a baby out of the hospital. We then meet Cecily again, in 2009, right at the other end of her life, as she makes a new friend, Sarah, and slowly makes new discoveries about the past. Then we are taken back in time to 1928, when change is in the air, and it is there that we begin to learn the story of Ida Gaze and her best friend and constant companion Freda Voyle.

Fifteen-year-old Ida is a strong swimmer, whom we meet waiting by the pool at the start of the 1928 Annual Gala in the small Welsh seaside town that is her home. The setting is beautifully and lovingly evoked so that the reader can picture the scene in their mind: 'the lido was a spectacle in itself. With its curved white walls and blue ralings, it was as handsome as a grand ocean liner docked for good on the headland...it was the largest, bluest pool in Wales with the sky stretching forever as its ceiling. It took your breath away, it really did.'

With Freda's great encouragement and support, and inspired by Amelia Earhart's recent feat crossing the Atlantic in the air and landing in the sea off Wales, Ida declares she is going to be the first person to swim the Bristol Channel, despite a large amount of skepticism from the people of the town, in particular because she is a woman. She will swim through 'the dangerous grey waters which separated Wales from England. Men with muscles like prize marrows were always trying to swim from the town's bach to Weston and being hauled out of overpowering currents halfway. Nobody had done it and nobody thought anyone - let alone a girl - would ever get to the other side.'

As the story progresses, the two best friends go to London together, looking for new experiences and exploring new possibilities, pursuing dreams far beyond the limitations and constraints of those available to them in their hometown. Freda had been the more reluctant of the two to leave. She is described by people back in her hometown as an 'oddball', a woman who stood out in those days because she, like Ida, didn't conform to people's expectations - she 'hated housecraft class as much as Ida did' and wore 'baggy trousers', and 'She noticed things, and understood things nobody else did' and she 'never accepted adults knew better.' They are both breaking free from places and people that would otherwise hold them back, Freda because of how she is judged in her hometown, and Ida because her unhappy parents are so narrow in their views. There is a delightfully apt description of them: 'Having a go at Ida seemed to be the only time they talked to each other. She'd come to think of the two of them as a pair of brackets with nothing in between.'

The two friends have different experiences of life in the Big Smoke: Ida seeks to build a career in journalism, and Freda intends to train as a nurse, and as they meet with disappointment and success, their friendship must change to encompass these different lives if it is to stay strong or even survive. For Freda, 'it had always been Ida who made her feel whole'. And equally, Freda 'gave Ida's life such detail.' As the reader gets to know the two friends, there are subtle intimations as to deeper feelings between them. But will the two of them ever want the same thing? I would like to write about the rest of the story, but I will not go into it any further here because what happens from here onwards is for the reader to discover themselves - I must merely write that the second half of the story is very moving and revelatory as the future unfolds and life deals its cards to Ida, Freda and Cecily.

I loved the different parts of the story, moving between the past and present, and how the story gradually builds in mystery, and then we have the unravelling of secrets, as the links to the past are slowly uncovered, until the full picture is revealed at the end.

It was wonderful to experience life with these strong female characters, to endure the pure joys and successes and dispiriting lows and sadness that they lived through, to witness the spirit of these women who broke away, to see how life changed for them and how they changed, who they ultimately became. The author illustrates the way life twists and turns, how we dream of one thing but don't always see what is right in front of us, how much we are willing to do for love and friendship, and the heartache when we can't always be everything that someone else wants us to be.

The author writes beautifully; the descriptions of people and places are so evocative, taking us back to   times and places now lost to history, and recreating them vividly for us to experience here. It was an added pleasure to read at the end of the book about the real-life wonder girls of the times, and to hear about the background to some of the places in the story. The novel also has a wonderfully atmospheric and fitting cover image and styling.

Freda remarks at one point that she used to enjoy reading her brother's comic when she was younger, 'but you've got to wonder why it's always the boys who get the heroes as though girls can't do brave things too.' Well, not anymore, for here are those brave girls.

I shed a tear as I closed the book, very reluctant to leave these characters behind.

Published by Simon and Schuster on 7th June 2012.

Thank you to the publisher for kindly offering a proof copy of this novel to read and review at their blogger event.