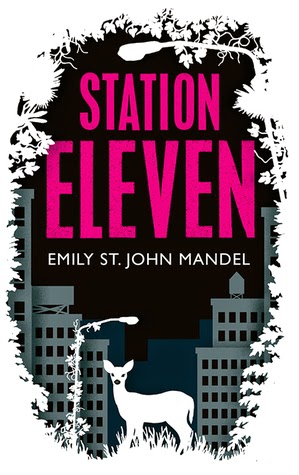 
DAY ONE
The Georgia Flu explodes over the surface of the earth like a neutron bomb.
News reports put the mortality rate at over 99%.

YEAR TWENTY
A band of actors and musicians called the Travelling Symphony move through their territories performing concerts and Shakespeare to the settlements that have grown up there. Twenty years after the pandemic, life feels relatively safe.
But now a new danger looms, and he threatens the hopeful world every survivor has tried to rebuild.

Moving backwards and forwards in time, from the glittering years just before the collapse to the strange and altered world that exists twenty years after, Station Eleven charts the unexpected twists of fate that connect six people: famous actor Arthur Leander; Jeevan - warned about the flu just in time; Arthur's first wife Miranda; Arthur's oldest friend Clark; Kirsten, a young actress with the Travelling Symphony; and the mysterious and self-proclaimed 'prophet'.
Thrilling, unique and deeply moving, this is a beautiful novel that asks questions about art and fame and about the relationships that sustain us through anything - even the end of the world.

'We bemoaned the impersonality of the modern world, but that was a lie, it seemed to him; it had never been impersonal at all.'

What an amazing read.

I absolutely loved this novel, it is incredibly thought-provoking, shocking, sad, yet also strangely uplifting at times. It's clever, inventive, impressive, at times chilling and haunting, at times heartwarming, and quite unlike anything I think I have ever read before really. I think I was unsure whether it would be a book for me, and I'm so glad I started reading it because I would have missed out on such a captivating, important book if I hadn't.

The narrative is so beautifully knitted together over the course of the book. I was absorbed by this story, it deserves all the praise and plaudits it has received.

I loved each of the characters - I think my favourites were Jeevan, Kirsten and Clark though - and I just loved how the author brought their stories together. Her evident storytelling skills and marvellous imagination bring us a frighteningly vivid and conceivable scenario for our planet's future, her understanding of the best and worst of human behaviour gives us an insight into a strange, unfamiliar version of our world, yet with common bonds of friendship and love, appreciation of music and theatre - most of all Shakespeare, cleverly woven into the story - , families and beauty, living on.

By sharing these catastrophic times with the reader through poignant details of several individuals' lives, we can identify with them, and the momentous changes are almost given more impact through the small yet devastating details we learn (I hope that makes sense). So when I read 'Jeevan was standing by the window when the lights went out. There was a stupid moment or two when he stood near the front door, flipping the light switches. On/off, on/off', I knew that this small thing, an action we all do so many times per day, was actually huge, life-changing, now, because that was the last time, because the power was gone, full stop.

It’s an extremely memorable book. The characters and some of the circumstances are still vividly in my mind now and it feels like they'll be there for some time to come. For me it was a page-turner yet I did actually sometimes put it down because I wanted to savour it, and to save some of it a bit longer; I didn't want the experience of reading it to be over too quickly.

I couldn’t stop thinking about the book even when I wasn't reading it though; I was either thinking about the situations one or the other of the characters were in, or thinking about how I might feel if I actually was one of them. I don't want to say much about what happens or how things change because you need to discover that as you read, but I was particularly fascinated by the airport and life there after the pandemic, as well as life on the road for the Travelling Symphony, and for Jeevan.

It's beyond hard to comprehend the level of devastation that has occurred in the world of this story, to image a life continuing without so very many of the people and things that we treasure.

It really made me think about our lives and our world, it made me appreciate a lot of things in the world anew - definitely a good thing - and it beautifully highlights what is most important to humanity.

I don't think I can get anywhere near doing it justice, please do try it though and don't be put off by the 'dystopian' tag - I am not a reader of post-apocalyptic fiction, or anything particularly futuristic, but I thought this was amazingly good. If this review comes off as overly enthusiastic it's because that's how I feel about this book.

I love the cover design too. It was really hard to know what to read next after this book because it was superlative in so many ways, everything else seemed not quite right for a while afterwards.

Just a superb, brilliant book and one of my absolute favourite reads this year so far.