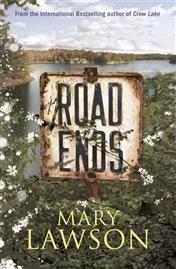 (This is a book I read and wrote the review for a little while ago, but kept back until nearer the publication date.)


This is the third novel by Canadian-born writer Mary Lawson. It tells of twenty-five-year-old Tom Cartwright, his sister Megan, and their father Edward, and the rest of their large family, in Struan, a small town in northern Canada. The paths of the three characters that Lawson focuses on run parallel, moving back and forwards in time a few years apart, each strand gradually reveals itself, and then the three are brought together as events very cleverly converge.

It’s the 1960s, Tom is intelligent and had a promising career ahead of him as an aeronautical engineer, but is withdrawn and hides himself away after the tragic death of his friend. Megan has at last escaped, to London, but worries for the welfare of her mother and brothers; as the only daughter, and with her mother only managing to care for her latest baby, the rest of the family of boys and men were under her care before she left. Edward looks back on his difficult memories of a violent father, and explores the remaining extracts of his mother’s diaries that recall the Ontario silver rush of the 1900s. He struggles to connect with his own family; he has regrets and wonders how his life got to where it is now, he hides away in his study and dreams of traveling, not noticing what is happening to his family.

Each of the three main characters is honestly, convincingly and roundly portrayed. Road Ends is beautifully written; a well-crafted, evocative tale that slowly captivates the reader, an eloquent, measured and touching story of tragedy, regret but also hope, and of the longing for independence and the chance to follow individual dreams, versus a sense of duty and responsibility.

I felt warmth and compassion towards these people; Mary Lawson conveys their dreams and sadness with poignancy and sincerity. I was intrigued by Edward’s past, by whether Tom’s life would change, and by Megan’s strength, her bravery and independence in coming to England and forging her own career. The locations are vividly realised; I could almost feel the wintery weather in Canada; she brings the surroundings to life and the landscape has a real part to play. I loved Mary Lawson’s previous novels and I relished the fine storytelling by her here once again. It is a captivating novel and a joy to read.

Published by Chatto and Windus
Reviewed for WeLoveThisBook
Posted by Lindsay at 08:00