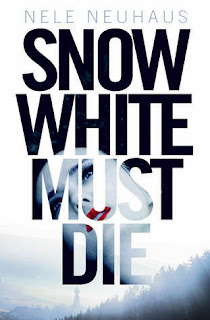 Published in the UK by Pan Macmillan

Although the fourth book in the series (as I understand it) of crime novels by Nele Neuhaus, featuring Detective Superintendent Oliver von Bodenstein and Detective Inspector Pia Kirchhoff of the Division of Violent Crimes at the Regional Criminal Unit in Hofheim, this is in fact the first book in that series to be translated into English.

The story is set in the small village of Altenhain, near Frankfurt in Germany, and features an intriguing scenario. We meet Tobias Sartorius as he is released from prison, having served over ten years for the murder of his girlfriend Stefanie – the Snow White of the book’s title – and his friend Laura. His conviction, when he was just twenty-years-old, was brought about due to circumstantial evidence – the two girls’ bodies have never been found. Needless to say, when Tobias returns to his hometown, he doesn't meet with a very warm welcome, plus he finds his parents have separated, his father is a broken man, and Tobias can see little future for himself now.

His return causes a strong reaction and reminds many people in the village of a past that many of them would rather not think about, and brings things to the surface that they would have preferred to keep concealed. As tensions rise, and violent attacks are made on Tobias and his family, detectives Kirchhoff and von Bodenstein are called in to look into the events and keep watch over this unsettled village that has had its equilibrium severely rattled. The more the detectives, in particular Kirchhoff, learn about the place and the past, the more they start to realise that there is a lot about the murders eleven years ago of Snow White and Laura that is still unknown. But the villagers quickly close ranks and it’s clear they won’t give up their dark secrets without a fight, and things go from bad to worse when another young woman goes missing.

I really enjoyed escaping into this mystery story. I could sense the suspicion and intrigue brewing within the small village and I was gripped as the secrets were uncovered and the surprising and shocking revelations came out throughout the tale. There is an intriguing and varied cast of characters, including Amelie, a newcomer to the village from Berlin, and I grew to care about some of them and feel for the innocent victims of the wrongs that had been and were still being perpetrated. Nele Neuhaus conveys the sadness and pain still suffered by those affected by the deaths years ago. As I read, I began to question what had happened in the past, and I had my suspicions as to who was hiding something; I think there are clues along the way that can be picked up on, though I’d be surprised if anyone could figure it all out. For me this wasn’t one of those crime novels that I absolutely raced through very fast, it was a little slower, but I don’t mean that in a particularly negative way, only that there was more to think about and contemplate with the many characters and strands to the well-plotted tale, and it kept me engrossed and guessing throughout.

We have some short sections that delve into the background and home lives of both of the two lead detectives, too, with a headache for Kirchoff regarding her house, and with a serious shock for von Bodenstein with regards to his personal life.  In a way I wanted to stay with the main storyline, but the diversions were never too long and they add colour and insight into the way the pair behave professionally. In respect of the personal lives of the detectives, it’s a bit of a shame that we have the fourth book in the series translated first, but this is what seems to happen from time to time with translated fiction.

Nele Neuhaus initially self-published her novels, and now is traditionally published. I enjoy reading fiction in translation, and in particular that set in Germany. I’ve read several reviews of this novel and noted that many UK reviewers have commented on the US English of this translated version. I can see their point; at times I was a little unsure about some of the ways things had been rendered, but if it were a choice of a US English translation or none at all, I’ll still take this one. After reading and enjoying this one, I would definitely read more and I certainly hope others in the series will be translated; otherwise I might have to follow my husband’s suggestion and try reading another of the books in the original German. It’s nice to see this translated novel on the Richard and Judy Autumn 2013 book club list.