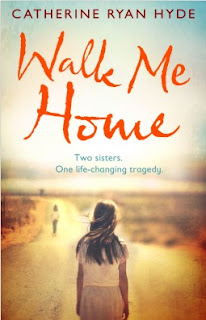 This moving story had me intrigued and asking questions straight away; who are Carly and Jen, why are they walking such a long way, just the two of them, so young? What has happened? Who is Teddy and why is Carly so determined that he is the one to help them?

Sisters Carly, 16, and Jen, 12, have set off from New Mexico and are trying to get to Teddy in California. They soon become hungry and tired, and it becomes increasingly difficult for them to continue and to stay safe and not risk it being discovered that they are on the run alone together; the threat of being taken in by the authorities and potentially separated keeps them walking and reluctant to reveal the reality of their situation to anyone.

Then the novel takes a step back further in time, a few months earlier, and we meet Teddy, their mother's ex-boyfriend, and we meet the girls' mother, and their recent past slowly reveals itself. The sisters have had a difficult, unsettled childhood and experienced much disappointment; and now their world has been turned upside down. They travel so many miles, struggling along together, desperate and starving at times, and as I read, I feared for them, but I was also heartened by the kindnesses that they encountered from people too.

It is primarily Carly whose thoughts we follow, and it's a very emotional as well as physical endurance test that she goes through on her journey. It is very clear that she has lost her trust in others and lost her belief in her self, and her self worth; she has convinced herself that she doesn't matter and that 'everyone likes Jen better'.  As I read, I willed things to change for the better for Carly because she had been so strong, I didn't blame her for having lost trust in people because of her past treatment, but she needed to take the risk of trusting again; the story illustrates how sometimes we have a new, unexpected chance for happiness in life and it is the ability to let go of fear and accept this chance, to take the risk of trusting again, that we need. This was such an important theme running through this story; who can the girls trust and believe in, who has their real interests and welfare at heart, who isn't all that they seem to be, and who cares more than they realise.

I've really enjoyed novels by Catherine Ryan Hyde in the past and I found in this new book the same warm-hearted and honest portrayal of people who find themselves facing the challenge of coping with huge difficulties and setbacks in their lives that I have admired before. She creates rounded characters, and the relationships they share feel very real; I cared about the sisters. The author has sensitively and thoughtfully incorporated a little of Native American culture into this story, and created two special characters in particular that I would love to meet. The sense of place was well conveyed, and this setting was important too, the intense heat of the desert landscape adding to the struggle as the girls were walking.

I liked the author’s note at the end of the book that clarified an aspect of the story that I had wondered about whilst reading. I think this novel would be really enjoyed by young adult and adult readers.

I felt this was an engrossing, well-paced story about being honest with yourself and having to admit to the truth, and learning to accept kindness from unexpected places. It is about loss, loyalty, truth, courage, and the hard decisions people have to make, the strength we have to find sometimes even when we are only a young age.

Thanks very much to the publisher for the opportunity to read an advance ebook copy of this novel via netgalley.