Voss and Edwards All Fall Down Treasure Hunt - Competition! 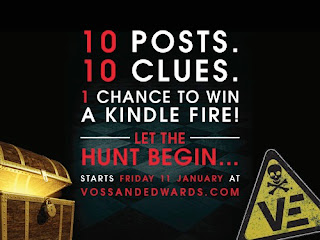 I am delighted to be part of the All Fall Down Treasure Hunt!

All Fall Down is the new novel from authors Louise Voss and Mark Edwards. It is published by Harper Collins on 14th February 2013 and is available now in ebook format.

First prize in the treasure hunt: A Kindle Fire – the superb e-reader from Amazon that also allows you to watch movies and TV shows, play games and, of course, read books!
3 runner-up prizes of a signed set of All Fall Down and Catch Your Death
To find out how the Treasure Hunt works, see below and also visit: http://vossandedwards.com/2013/01/07/win-kindle-fire/ and http://www.killerreads.com/news/the-voss-and-edwards-treasure-hunt-how-it-works/

Thanks to Mark for the guest post below - which also contains the next clue! The question you need to find the answer for here is at the bottom of the post.

Inside the mind of a killer
by Mark Edwards

Louise and I recently received a comment on our blog that told us that we should either seek psychiatric help or turn ourselves into the authorities for harbouring murderous thoughts. The commenter had just read a brief extract from our forthcoming novel, Forward Slash, which I had written.

As a vegetarian dad of three, who hardly ever entertains murderous thoughts – even while driving or trying to get my trolley down the aisles of Asda on a Saturday – I would like to point out that when I write from the point of view of a sadistic killer I am using that most vital tool for novelists: my imagination. I hope that being able to create the voice of a psychopath does not mean that I am in any way psychopathic myself. I’ve even taken the Psychopath Test just to double-check and am happy to report that I am completely normal, if not 100% sane.

So how do you get inside the mind of a killer?  Is it simply a case of tapping into that dark part of yourself and exploring the negative emotions that we all feel at some point? Or is it a more academic exercise, whereby the writer researches psychopathology and tries to work out what makes the violent criminals in our society tick? The answer is a combination of both.

The first thing that any crime novelist has to do when creating their ‘baddie’ is to work out their motivation and background. What turned them into a monster? Were they born bad, and does such a thing even exist? What are their aims? If they are a serial killer, they will almost always – in fiction, at least – be trying to achieve a goal, whether it’s fame, transformation or to fulfill their sadistic urges. Serial killers in books nearly always ‘get a taste for murder’ and then have to kill more and more, and in increasingly extreme ways. Another challenge for us writers is to create a villain who is original but who also follows the conventions that readers have come to expect.

In All Fall Down, we have two central villains – Angelica, the leader of a small group of women who want to bring about the end of the world, and her violent sidekick, Heather. Angelica’s motivation is grand – she believes that she has been chosen by an Ancient Egyptian goddess to cleanse the earth to prepare for a new Golden Age…although the true motivation and psychology behind this is not revealed until the end of the book. Angelica is methodical and, mostly, in control, except when her lusts drive her to carry out acts of extreme violence. At least one reader has told us he had the hots for Angelica while reading it – despite knowing what happens to the men she, ahem,  ‘romances’. She’s the ultimate femme fatale.

To write Angelica, both Louise and I had to understand why she believed in her apocalyptic visions – what was it that had made her this way? If we could convince the reader that Angelica truly believed in the Goddess, then all of Angelica’s actions become logical. She is like a soldier or agent with a mission that she has to carry out at all costs. We also had to understand what made her so charismatic and persuasive. Louise wanted to incorporate this cult mentality and detailed descriptions of Angelica’s psyche and motivations, having herself briefly been part of (an admittedly fairly benign) cult in the 90s.  She understood what made people follow leaders whose philosophies, if the public were ever to learn of them, would appear at best deluded and at worst, completely unhinged. Angelica is a cross between Charles Manson and one of the female assassins in Kill Bill.

Angelica’s sidekick, Heather, is, on the surface at least, more straightforward. She is more brutal and sadistic than Angelica, apparently enjoying torturing and killing anyone who gets in her way. She sees other people as problems that need to be solved – and goes about her business without empathy or conscience.

Once you have figured out what makes them tick, you need to let your imagination run free and harness your darker emotions. We all, at some point, feel anger or rage or loathing (I hope it’s not just me!) – these are powerful tools that can be used on the page.

If you can make the reader fully believe in your killer, no matter how extreme their actions, that makes them far scarier. You don’t have to be a murderer to get inside one’s head. I’d like to take the guy who left that comment on our blog out for a coffee so I can explain that to him… but he would probably be too scared.


The question you need to answer is: ‘What are the names of the two central villains in All Fall Down?’

How does it work?

Starting on Friday 11th January, two blog posts will go up each week for four weeks on crime writing blogs within the community. As well as providing a fascinating insight into Voss and Edwards’ writing relationship, their inspiration for writing All Fall Down, life in a cult and killer viruses, each blog post will contain a clue!  To find the clue, simply read the blog post and answer a question – the answer to which will be in the post itself. Once you have collected all ten clues, send them in to killerreads@harpercollins.co.uk along with your name and address, and you’ll be entered into a prize draw to win a brand new Kindle Fire! Three lucky runners up will win a signed copy of Catch Your Death and All Fall Down. The deadline for entering is 28th February 2013, and the winner will be revealed on 4th March. 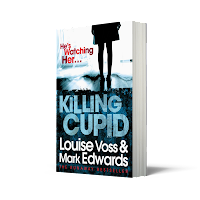 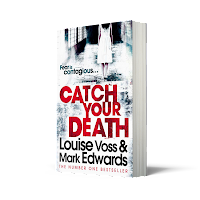