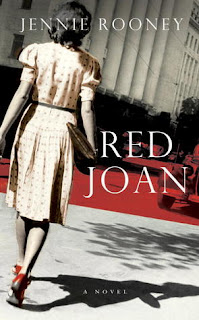 ‘Nobody said what they did during the war. They were different times.’

Joan Stanley is an eighty-five-year-old grandmother living in south-east London. One morning she reluctantly answers the door to find the Security Services have come to question her about her past after all these years.

The dual time narrative structure of the novel is employed very effectively here, with the now elderly Joan recounting her story to the MI5 operatives, so that we move from the present to the past and back with her as we read.

We are transported back to 1937, Joan Robson is a student at Cambridge, where she meets and befriends Sonya Galich and her cousin Leo. Her friendship with them will shape her life. They are supporters of communism and Joan becomes involved with their activities though never commits herself wholly to the cause. When World War Two begins, Joan is recruited to work with scientists in a laboratory on the ‘Tube Alloys’ project – developing an atomic weapon. Over the coming years, as old friends leave and re-enter her life, and the war comes to a close with events she had hoped never to see, her character and her loyalties will be severely tested.

This spy novel which spans the period from the late 1930s to the time of the Cold War was inspired by a true story of a British spy who was unmasked after many years as having worked for the Soviets.

Red Joan boasts a gripping narrative and a compelling lead character. The intrigue builds and I found the progression of the plot towards the ending fascinating. I was engrossed and intrigued by Joan; she is at once an intelligent yet naïve character. I thoroughly enjoyed reading about her life and about society then, Joan’s position as a woman working in a scientific field, pursuing studies and a career despite her mothers wishes, falling in love and learning for the first time how it felt to be truly loved in return, yet fraught at the situation she finds herself in, torn between loyalty to her country and the deep need to do what she feels is right. We see her grow convincingly as she learns from what has happened in her life. In a very fitting use of language, Joan ponders: ‘How strange the human mind is, she thinks. Unknowable and unpredictable, its thoughts whizzing like electrons inside an atom. Invisible to the human eye.’

This is an absorbing and accomplished novel and causes us to ask ‘Where does responsibility begin, and where does it end?’


I originally reviewed this novel for We Love This Book - thanks to them and to the publisher for a copy of this novel to read and review.