I am pleased to welcome author Susan Buchanan to the blog today! 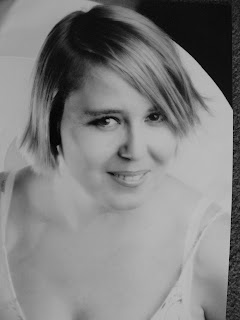 Susan's first novel is Sign of the Times, and her latest book is The Dating Game.

I'd love to know about the inspiration for The Dating Game.

Inspiration for The Dating Game was easy. Sometimes all it takes is a flyaway comment. A friend of mine had split up from her long-term boyfriend a few years previously, but what with having a child to take care of and work to juggle, was finding it difficult to meet men. She joined a dating agency for professional people in Glasgow. Quite frankly, although Gill, my protagonist has a lot of ups and downs, her dating agency experiences are far better than my friend's were! Gill is single and doesn't have kids, so it's plain to see that I took only the germ of the idea and ran with it. I had noticed there were some internet dating novels around at the time, almost four years ago, when I had the idea, but no-one appeared to  have written about dating agencies and The Dating Game was born, although I didn't get past chapter 3 until Mar 2012! 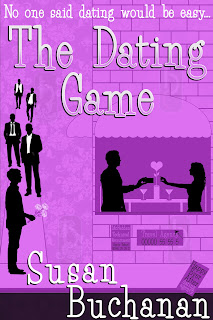 My current WIP is What If. Its progress is slower than I had hoped, simply because I am now 7 months pregnant and can't whizz around at my usual 100mph - my nickname is Speedy Gonzalez! Plus I keep falling asleep all the time!
I hope to release What If in the autumn. It's going to be kind of bloke lit written by a chick. Basically my main character wakes up and wonders if he is leading the life he should be. He realises he is no longer content with his lot, which is a shock to him. He's not in a relationship and starts back-tracking through his past relationships and decisions in general. What if he had made a different decision? I'm having a lot of fun with it!
There will still be plenty of relationship based stuff, in fact that's the crux of the matter and you will still see inside the heads of the women involved, but the protagonist, Cameron is a travel agent and 100% male! (just in case anyone got confused with Cameron being a girl's name, too!)

Where do you write - do you have a special place or do you like to vary where you do your writing?

To be honest, I am quite naughty. I have incredibly bad posture from sitting on my sofa for too long with my laptop on my Cushdesk (best invention ever!). When I am 'in the zone' I behave better and write in my office for a few hours, stopping only to be lured to the kitchen by cups of tea. I am not really one of those writers who misses meals as they are so engrossed - I love my food too much for that (as can be seen in both my novels!) It's surprising really, that pregnancy aside, I am not normally the size of a house! I used to write on holiday all the time, but as I now write full-time, last year was the first year I didn't write. I tend to write in the home office and edit/redraft with a printout on my sofa and several highlighters and different coloured pens!

Is there a typical writing day for you? Do you have a routine - are you quite disciplined when you have a book on the go?

Generally speaking I am more disciplined. Again the pregnancy thing has thrown that out the window. I have worked from home in international sales roles even before I was writing full-time, so I am well accustomed to having to be very disciplined. The biggest drain on my time is social networking. I was so busy blogging and marketing Sign of the Times, it took me longer to write The Dating Game than I wanted and it was a mad rush at the end - I was working 16 hours a day to get it ready for the launch and even then, I had to move it out by a week. But, when I sat down to write The Dating Game with a vengeance, I was pretty disciplined. I was allowed 1-1/2 hours of Twitter in the morning and then maybe again at 5pm or so. Housework, going out with friends, etc went by the wayside and my Other Half, who is a better cook anyway, basically made most of the meals, so I could write. It took almost as long in hours to redraft as to write! Procrastination and being able to do household/admin stuff as I work from home are problems, but once I get started, everything just flows. I will be writing later today - promise! 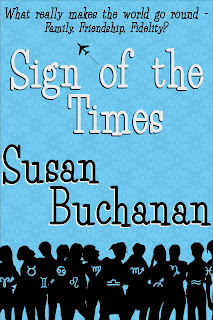 What sort of books do you most enjoy reading?

Mainly I read chicklit, women's contemporary fiction, crime, thrillers and legal dramas, although I dabble with politics, business books and world affairs too. I like to know for example, what will happen with the two emerging superpowers of China and India. But to relax I read chicklit like Sophie Kinsella, Cecelia Ahern and Maeve Binchy. I've even read a few romantic suspense recently which I have thoroughly enjoyed such as Terry Tyler's books. I also read some dramas, family-based, eg Joanna Rees' A Twist of Fate and Maria Savva's Coincidences. I can't see past John Grisham or Michael Connelly and I used to feel the same about James Patterson, but ever since he started releasing a book every six weeks and co-writing, where he only writes the 40 page outline, I have given up on those. It was costing me a fortune in hardbacks!

I also particularly enjoy novels set in different countries, whether it's historical fiction, such as Susan Louineau's The Chapel in the Woods, or the more contemporary (relatively) Joanne Harris' Chocolat, to Elizabeth Kostova's The Historian (about the real tale behind Dracula) and Carlos Ruiz Zafon's wonderful The Shadow of the Wind set in Barcelona. I am fortunate enough to be well-travelled and I love reading about places I have been and imagining myself there, within the context of the book. I also love reading about places I haven't been, but which interest me and make me want to visit!  I'm also a fan of some of the Swedish crime writers, like Jo Nesbo and Camilla Lackberg and from a psychological thriller point of view, Sophie Hannah. I discovered an awful lot of new authors last year, both indie and traditional. Now I just need time to read them!

About the author
Susan Buchanan lives in Central Scotland with her partner, Tony. The Dating Game is her second novel, released 2nd Nov 2012. Sign of the Times, her first novel, was published in Mar 2012. She will shortly start work on her third novel, due for release Autumn 2013.


Thanks for being the author in focus on my blog today, Susan!