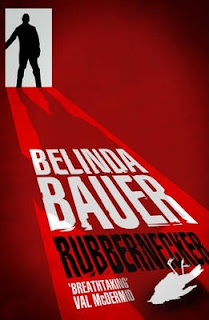 ‘Rubberneckers. Desperate for a glimpse of death.’

This is a cracking crime novel from Belinda Bauer. Patrick is a complex and yet rather endearing character who has Asperger’s syndrome. He has gone to University to study anatomy in order to try and solve his quest with regard to the death of his father when Patrick was a young boy. His father’s death left a hole in his life. He doesn’t get on well with his mother and she in turn struggles to deal with him.

The novel is also partly set in a neurological ward and we have as one of the narrators one of the people in a coma; he is struggling to muster up any communication that can be understood by the people watching him, those wanting him to return to life; this gives us a unique and fascinating viewpoint on events, and I felt this was a very clever device to use within the story. Another viewpoint is the selfish lazy nurse who was out for herself, this introduced another angle to events in the ward.

Patrick becomes intrigued about the cause of death of the body his group is working on dissecting in his anatomy class. Unlike most of the other students who are studying medicine and saving lives, Patrick has a specific quest which makes him singularly interested in anatomy as a means to answering the question which has dominated his thoughts since his father left his life. ‘He didn’t care what made people work. He was only interested in what happened whey they stopped…’

Patrick’s curiosity and determination is what drives the story forward. He slowly begins to find a new interest in his life, a new goal to solve the fresh mystery he has uncovered. He also developes a little in his interactions with people, such as with compassionate fellow student Meg, despite the boundaries and limitations of behaviour and understanding of others that his condition dictates.

There are so many wonderfully satisfying episodes in the plot which I wish I could write about but I can’t mention them here because they need to be discovered and savoured as you read.

The bringing together of the story arc of the whole novel from beginning to end was very cleverly done and something which I thought about at the end as all the revelations were complete. I loved the way the narrative is structured. Each character feels believable and compelling, and each of their individual parts of the story are so cleverly brought to a conclusion which integrates into the book as a whole.

There is some deliciously dark humour; at times I was laughing an awful lot and wondering whether I should really be laughing at these things, but the way Belinda Bauer writes these events is so clever, combining the gruesome with the ridiculous and mundane to superb effect.

There is genuine terror, suspense and intrigue throughout and I couldn’t read this book fast enough.

A brilliant read, a cracking and inventive mystery, cleverly written and darkly funny, and a standout book of the year so far.

Thanks to netgalley and the publisher for an ebook of this novel to read and review in advance of publication.