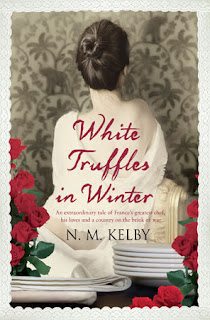 The names Escoffier and Ritz will be well known to anyone with an interest in food, as will the legendary restaurants at The Ritz, The Savoy and The Carlton. Less well known perhaps is Escoffier’s history, his marriage to poet Delphine Daffis and his life-long affair with Sarah Bernhardt, his survival of a serious hotel fire and his involvement with the Titanic. Author NM Kelby creates a fascinating story of love and food told, as Escoffier reaches the final weeks of his life, in a combination of flashback and recipes. Escoffier was a complex man: he was imperious, yet kind and philanthropic; he loved food, but ate little; he adored his wife, yet spent most of his life living apart from her, obsessed by both cooking and his actress lover; he was at times extremely wealthy, but died with an empty larder and huge debts.

His contributions to the culinary world include the transformation of the restaurant kitchen by systems that form the basis of those used today. He left a wealth of recipes in books such as Le Guide Culinaire, which represent the best of French Haute Cuisine. Most importantly he raised the status of the lowly cook to that of respected chef.

That alone would make an interesting story. What author NM Kelby has achieved goes beyond the bare facts, just as Escoffier insisted a dish should transcend it ingredients. She creates a narrative that is peopled with fascinating characters and is dense with sensual detail. Scenes from the end of his life are intercut with his recollections of the distant past; as he attempts to finish his memoirs, his housekeeper Sabine attempts to keep the bills paid and the family fed. Meanwhile the dying Delphine yearns for a dish to be named after her, just as Escoffier named dishes in honour of Bernhardt and Nelly Melba, Queen Victoria and Kaiser Wilhelm.

The novel begins with a deliciously affecting seduction scene (so what if it owes a little to Ghost?) and it ends with a single word. Joy. Between the two is a richly imagined creative life. It is a delight to read.

'White Truffles in Winter' is published by Alma Books

Thank you very much indeed to Angi for her lovely review of this novel for The Little Reader Library. Angi is a full-time student, a part-time teacher, a part-time writer, a full-time Mum and an avid reader. If anyone has any advice on how to fit forty-eight hours into a twenty-four hour day, she says that suggestions would be much appreciated!

You can follow the author on twitter @nmkelby and visit her website here.
Thank you very much to the publisher for kindly sending a copy of this novel for review.
Posted by Lindsay at 02:22