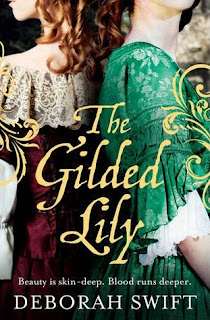 Deborah Swift’s second novel, The Gilded Lily, tells the tale of two sisters, Ella and Sadie Appleby, who flee from Westmorland to London following the suspicious death of Ella’s employer. Once there they secure employment in a wigmaker’s workshop (a boom industry in the late 17th century), but before long their past catches up with them and they are forced to go on the run once again.

Thanks to a fortuitous meeting with a rich young playboy, Ella lands a role in another growing new industry - the selling of beautifying lotions and potions to idle society ladies - in a shop called The Gilded Lily. However, Sadie finds survival less easy thanks to the port-wine birthmark which covers half her face and makes her an easy target for bounty hunters and busybodies eager to claim the reward offered for the capture of “The Savage Sisters”.

The sights and smells (particularly the smells!) of Restoration London are vividly described and the sisters’ exploits make for a fast-paced and exciting tale, rich in atmosphere and adventure. Ella is a bold and feisty young woman, making up for what she lacks in talent with a good dose of charm and naked ambition. Sadie is her polar opposite - bright but timid and sensitive. Although the main characters are fictional, the author has included enough actual events and cameos from real people of the time to give the story atmosphere and authenticity.

The storyline could lead to comparisons with Slammerkin by Emma Donoghue or Scapegallows by Carol Birch - I’d say it’s a lighter read than those two, but no less enjoyable, and in terms of period detail I’d recommend it to anyone who enjoyed The Apothecary’s Daughter by Charlotte Webb or The Darling Strumpet by Gillian Bagwell. I was really impressed by my first Deborah Swift novel and will be adding her to my list of ‘must read’ historical fiction authors. I’ve already ordered a copy of her first book, The Lady’s Slipper, from Amazon, and was pleased to see that it’s a sort of prequel, featuring some of the main characters from The Gilded Lily and a with a bit of 17th century witch-hunting thrown in - sounds just my cup of tea.

Guest reviewer Denise Powell has kindly reviewed this novel for The Little Reader Library - many thanks to Denise for this lovely, insightful review. Denise is a very keen reader whose reviews I always enjoy reading and whose opinion I trust when choosing a book.

Thanks to the author and publisher for sending a copy of this novel to read and review.
Posted by Lindsay at 12:59