It's lovely to welcome guest author Nicky Wells to my blog today! 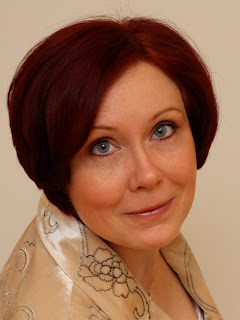 First of all, I want to say a huge thank you to Lindsay for hosting me on the Little Reader Library as part of my blog tour for the launch of my debut novel, Sophie’s Turn.  It’s an honour to be here and to meet your readers, Lindsay: you’re a star!

When do you find the time to write, I get asked. Often.
“Well,” I tend to reply. “Do you want the short answer or the long answer?”

And answering the question made me think about just when, and how, I find the time to write these days, because finding the time isn’t always easy.

Sophie’s Turn, Part 1 in my Rock Star Romance Trilogy, was written almost seven years ago now.  The sequel was written this past year over a four months period.  As I am looking back over the two experiences, I can’t help but marvel how different my life is now, and how changed my writing universe has become. 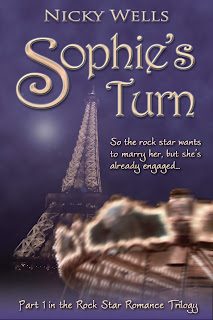 Sophie’s Turn was written in a perfect writer’s environment.  I was alone at home during the day, with no worries or chores, or anything else to do but write.  I would get up at leisure, have breakfast, switch on the computer and get going.  Task one would be to re-read the previous days’ work; and then, I would launch right in.  Most days, I would write for four or five hours, with breaks as required—or not, as I would often forget to stop for lunch.  By the time my husband came back from work, I would have my days’ labours neatly printed out and ready to be read out to him after dinner, snuggled up on the sofa, for instant feedback and review.  If the fancy took me, or I couldn’t sleep, or both, I would write some more later in the night because… well, I could sleep as late as I wanted to in the morning.  This was a blissful, happy and entirely stress-free experience.

Not so for the sequel!  Several things changed in my life to make writing now an exercise in quasi-military precision, extraordinary self-discipline and perseverance in the face of many, many interruptions.

First of all, of course, there are two children in the picture.  Gone are the days of leisurely starts to the morning, or unlimited writing time!  Instead, I have to fit writing into school hours, so that cuts the ‘available’ time in half or less.  Of course, I also fire up the computer having already completed the morning school run marathon of getting two reluctant children out of bed, dressed, fed and off to school.  Most of the time, I feel like having a nap when I walk into the door, not switching on the computer to write!

And of course, there’s the mad social whirl that is Twitter and Facebook, not to mention my blog.  Those endeavours didn’t encumber me when I was writing Sophie’s Turn, but it has become an integral part of my author’s platform and now demands a significant amount of attention.  Thus dwindles the available writing time… even more.

Where in the past I had ten or so uninterrupted hours at my disposal every day of the week if I wanted them (except at weekends, of course!), now I count myself lucky if I can scrounge two or three.  Before last Christmas, things got so manic that I was content if I could manage just half an hour.

And yet… the sequel to Sophie’s Turn has been written, and the third book is in the works.  How, you ask?  Well… as I hinted above:  military precision schedules, rigorous discipline, and, of course, the chief motivator, the overpowering urge to get the novel written.  So during my writing time, I don’t answer the telephone, or check email or social networks, or do anything at all:  eat, drink, clean house… all of that had to wait and fit in around the writing.

In addition, I scrounged a little writing time here and there in the evenings, perhaps when my lovely husband was away on business travel, or perhaps just before bed.

And do you know the really surprising thing?  The pressure, the time constraints, the requirement to perform when to schedule, not when I wanted to… all of that concentrates the mind wonderfully.  Somehow, I discovered an ability to be creative ‘on tap’, and to write fast and furiously.  And shall I tell you something else?  The sense of achievement is tremendous.

So there you have it.  Idea-rich, time-poor author writes fast and furiously in small instalments whenever she gets a chance, produces excellent glamorous and romantic fairy tales.  Yup, that’s me… and now is your chance to sample the fruit of my labour in Sophie’s Turn.

About Nicky Wells: Romance that Rocks Your World!

Originally born in Germany, Nicky moved to the United Kingdom in 1993, and currently lives in Lincoln with her husband and their two boys.  In a previous professional life, Nicky worked as a researcher and project manager for an international Human Resources research firm based in London and Washington, D.C.

Visit Nicky on her blog where you can find articles, interviews, radio interviews and, of course, an ongoing update on her work in progress, the second and third parts of the Rock Star Romance Trilogy.  You can also follow Nicky on Twitter and find her on Facebook.  Nicky is a featured author on the innovative reader/author project, loveahappyending.com and has joined the Romantic Novelists’ Association. Nicky also has author pages at Sapphire Star Publishing and, of course, Goodreads.

Slapper.  Slut.  Adulteress.  These are hardly words that Sophie Penhalligan would normally use to describe herself.  Yet this is exactly how she is behaving, all things considered, even if she isn’t quite married to Tim yet.  And it’s all happening because her past is coming to tempt her!  Nine years ago, she met her teenage idol and rock star extraordinaire, Dan, up close and personal.  Well, almost.  Now Dan has crash-landed back in her life.  How could Tim ever stand a chance against the charming, handsome singer?  How could she?

Sophie, now twenty-eight and a budding newspaper journalist, is happily embroiled in a relationship with Tim, her boyfriend of two years.  Until recently, she was confident that Tim would eventually propose—probably as soon as he could get his act together.  But just as Tim’s persistent inaction is beginning to cast a cloud over their relationship, Dan’s sudden reappearance turns Sophie’s world upside down.  Thus unfolds a roller-coaster of events including an ill-fated trip to Paris with Tim, a night of unfulfilled romance with Dan, Sophie and Tim’s engagement party gate-crashed by Dan, and Sophie’s professional secondment to accompany Dan’s band on their revival tour—at Dan’s special request and very much against her will.

And then, one fine day in Paris, Sophie suddenly finds herself engaged to Dan while her erstwhile fiancé Tim is...  well, doing whatever it is Tim does back in London.   What is she to do now?  Who wouldn’t give anything to meet their favorite star, let alone marry him?

Find out how Sophie gets into this impossible situation, and how she turns it around, in Sophie’s Turn, the honest, funny and sometimes bittersweet story of one woman’s entanglement with a rock star.

You can read my review of Sophie's Turn here.

Thanks very much for visiting, Nicky!