Somebody to Love - Sheryl Browne 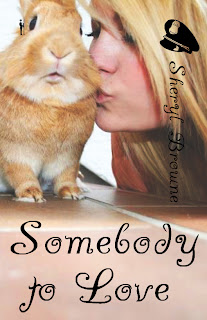 Donna O'Connor is a single mum to teenager Matt, and wonderful three-legged dog Sadie and little houserabbit Findus. She works in an office but would ideally like to get involved in working directly with children with difficulties, at a respite home, helping them learn. Her first marriage ended, her ex-husband Jeremy now having taken up with someone new, and being less than helpful with his fathering duties to Matt.

Mark is a policeman and single father to his autistic son, Karl. He would love to find a lasting relationship with someone who can accept him and Karl as they are, but fears that this will ever happen.  So when he meets Donna, and feels an instant attraction, he hesitates before telling her the full facts about his life, despite sensing she is a kind-hearted lady. And for her part, Donna wonders if Mark would 'really want to be embroiled in the life of a single mum and all the problems that went with it?' Not telling the truth initially to each other, though, means that lies and misunderstandings abound, and any chance of love is in jeapody.


This author shows a true understanding and appreciation of how rewarding relationships between humans and animals can be. She writes about relationships convincingly, and has created warm, likeable, but flawed and therefore very human characters in Donna and Mark. Equally, Sheryl Browne writes with sensitivity and understanding regarding Karl, and with authority and insight as to the possibilities an autism assistance dog can offer a child's life; 'Assistance dogs can vastly improve the quality of an autistic child's life, and thereby that of the parents and carers. As well as allowing them some independence, they provide companionship, unconditional love, a source of comfort and consistency when environments change and anxiety might be high.' This is illustrated through Karl's encouragingly positive steps with his new canine companion Starbuck by his side; 'Karl studied the dog for a second, his hair plastered to his head, his chest heaving, that familiar furrow in his brow that had Mark constantly wondering what he was thinking. What went on in a six-year-old mind where abstract ideas made no sense? Mark is thrilled when, immediately subsequent to this, Karl runs alongside with his dog and they play together, slowly developing Karl's behaviour.

I liked both Donna and Mark, and wished they had had more confidence at times, and less doubt about themselves and each other, but this is often the case in real life - we can't find the confidence to believe we are deserving. Yet they are two lovely people, and the misunderstandings and complications are frustrating because I felt that I knew they should be together, and I wanted them to have just one moment together alone, uninterupted by children, parents or animals to be able to set things straight!

Despite their shared nervousness, there are glimpses and moments of tenderness early on which show how much they actually like each other. When Mark tells Donna he would always want to make her laugh and smile it means so much to her.  'It was such a small thing he'd said, but so poetic in its simplicity, her disorientated heart felt full to overflowing. He hadn't been gushing, full of false compliment designed to impress. He'd picked on the one thing she quite liked about herself: her smile, which she hadn't had a reason g to use much lately.'

The supporting cast of characters, including Donna's mum Evelyn and sister Alicia, and Mark's father Robert, as well as Evelyn's friend Dot, and Agnes from the park, all add to the narrative. I thought the dialogue between Donna and her son Matt was particularly well-written and fitting.

I feel that this story has been written with real warmth and heart, with a wry humour at the ups and downs that life throws at people. It was lovely to read a story where companion animals feature prominently, as they so often provide us with much needed company and unconditional love. In particular rabbits and dogs, which are both close to my own heart.

I have to finish by saying that this is the cutest book cover ever! The absolutely adorable Findus the rabbit featuring so sweetly with his adoring human friend means I will never get tired of looking at it!

Thank you to the author and publisher for kindly sending an ebook copy of this novel to read and review.

You can read a feature posted on my blog earlier this year about this book and the author here.

Find out more about the book and Safkhet here.

Sheryl is part of loveahappyending - click to find out more.