The Girl on the Stairs - Louise Welsh 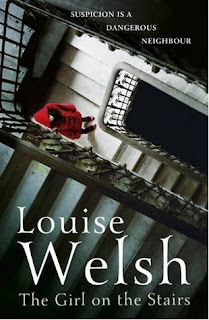 'This city is full of ghosts, most of them harmless. It's the living you have to watch out for.'

Jane comes over to Berlin to join her partner Petra, who is already living and working there. Jane doesn’t know anyone else in Berlin other than Petra’s brother and his partner, and her German isn’t fluent, so straight away she feels rather alone and isolated there. She is six months pregnant when she arrives. Jane takes an interest in the teenage girl, Anna, living next door with her father Alban Mann, when she meets them and then overhears voices, and she pieces together what she thinks is happening.

I liked the setting of Berlin with its own ghosts, and the ruined building behind the flats they live in, looming and casting shadows over their place:

'...any sound in the courtyard caught her attention and when everything was silent there was the shadow of the derelict building darkening the room. Even when she looked away she could feel the backhouse's presence, brooding at the corner of her eye.'

There is the graveyard nearby. It all creates or contributes to the unsettling, uncertain mood of the book. The atmosphere is dark, confined, brooding, always the hint of someone lurking, flashes of movement, silhouettes; this creates such tension.

Jane is a compelling and complex lead character. She is persistent and won’t be dissuaded from what she thinks is the truth. She doesn’t always do what you think she ought to, or what you might expect, which makes for interesting fiction. Jane gets very involved with pursuing her train of thought. She clearly believes in what she thinks has happened, but is she seeing things clearly, or imagining things that aren't really there, or haven't really happened? She seems to exist in a state of paranoia, both about what is going on around her, and at times about her relationship too.

This is a dark, haunting novel. The story builds and as the tension increases I enjoyed it more and more, and felt it got better and better until I was gripped, and felt that there's a very good writer at work here, creating this sense of unease within the reader. It's a fairly short novel, written in spare prose with evocative descriptive passages and effective dialogue that always adds to the plot progression. I liked it a lot and will be looking out for other books by this writer.

Reviewed for Amazon Vine
Posted by Lindsay at 09:43