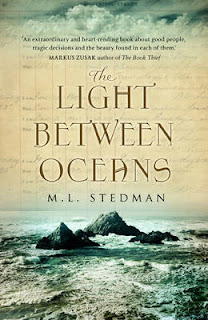 'He's in a place where there's just wind and waves and light, and the intricate machinery that keeps the flame burning and the lantern turning. Always turning, always looking over its shoulder.'

Tom Sherbourne is haunted by traumatic memories of his horrific experiences in World War I. He is one of the men who have returned to Australia, as so many did not. He is not physically scarred, 'but he's scarred all the same, having to live in the same skin as the man who did the things that needed to be done back then.' Now, looking to his future, he becomes a lighthouse keeper. He takes a position on remote Janus Rock, off the coast of South-Western Australia, with Point Partageuse being the nearest community on the mainland. Partageuse is a place where everyone knows everyone else, and where, after the war, 'gradually, once again lives wove together into a practical sort of fabric..', where '..Janus Rock, linked only by the store boat four times a year, dangled off the edge of the cloth like a loose button that might easily plummet to Antarctica.'

He meets local girl Isabel Graysmark whilst he is on the mainland, they correspond with each other when Tom returns to the lighthouse, and they fall in love and marry. For Isabel, the war has instilled a sense of urgency into life: 'If the war had taught her anything, it was to take nothing for granted...life could snatch away the things you treasured, and there was no getting them back.' Moving forward in time to the mid 1920s, we meet them living out on Janus Rock together, with a sadness hanging between them that they have no children, Isabel having suffered miscarriages. When a boat is washed up on the rock, they make a decision that day which will change the rest of their lives, as the couple is torn between love and desperate need, and the truth and reality of their situation.

There are some beautiful descriptions of the places, which made me want to visit the fictional Partageuse. Equally, the remote location of the lighthouse, the effects of the weather, the detail of the daily duties Tom carries out, is all conveyed well, and very convincingly, so that the reader can imagine the routine of their days, sense the isolation of the lighthouse keeper and his wife, and feel the remoteness of life on Janus Rock. The effects of the War on the community in Partageuse are movingly described, reminding us of the involvement of Australia in that conflict.

This is stunning prose and heart-wrenching storytelling for a debut writer. Through the story, the author delivers many truths about life. She highlights the best and worst sides of humans, the amount of courage, the strength of love, the severity of intense pain, the cruelty inflicted by a decision made out of Isabel's desperate longing, the remorse felt. A lovely read, it is also heartbreaking as the story unfolds and the repercussions play out. I was willing all the characters to the 'best' outcome for all of them, somehow. This story really touched me, I felt quite deeply affected by it, and I cried at the end. I loved this book. It's a great debut novel.

Thank you very much to the publisher for sending me a copy of this novel to read and review.

Published on 26th April 2012 by Doubleday, an imprint of Transworld Publishers.