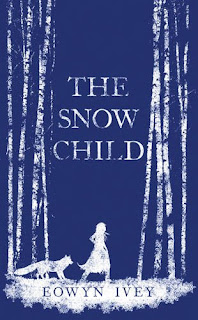 ‘It was fantastical and impossible, but Mabel knew it was true.’

A beautifully written, magical novel with its origins in a Russian fairy tale. In it we meet Jack and Mabel, an older couple who moved to the Alaskan wilderness to make a new life, after tragically losing their unborn child. It’s a harsh, unforgiving landscape, and life is incredibly tough for them. At first it seems a million miles from the life they had imagined for themselves there. Then, one night as the snow falls, Mabel and Jack decide to build a snowman, a snow child, a little girl which they adorn with mittens and scarf, and Jack carefully carves facial features. The next morning the figure has gone, and they being to glimpse movement in the woods. What, or who, could it be? A little girl appears from amongst the trees, and steps into their lives.

The bitterly cold, isolating environment of the homestead is superbly conveyed. We can imagine what drives Mabel to feel the way she does about the place as the book begins; the darkness and loneliness have begun to penetrate her thoughts so deeply.  Equally we can envisage how hard it is for Jack to try and build up the farm they had hoped for there. But alongside this despair and hardship, there is hope. In the form of the feral little girl who emerges from the woods after the snow child has gone. Beyond this, there is new-found friendship for Jack and Mabel with the Benson family; mother Esther is a particularly endearing character with her forthright manner and kindness to Mabel. Through the child, and their new friends, and over a number of years, Jack and Mabel gradually develop a growing love of their new environment. The author depicts the landscape and the inhabitants so vividly; the reader gets a keen sense of the cold, bitter weather and the harshness of the days lived out there in that wild place, and we come to understand how Mabel and Jack have to adapt if they are to survive, how they must become accustomed to hunting for their food.

The love that the couple have for the little girl is strong and binding, but she is used to her wild ways, hunting in the woods with a fox for company, living her life outdoors; can the dreams of all three of them ever marry together? The fragile ethereal nature of her presence is the magical heart of this captivating book.

Published in the UK by Headline Review on 1st February 2012.