All That I Am - Anna Funder 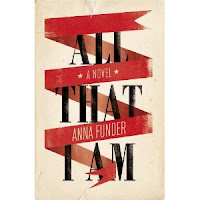 This is the first novel from Anna Funder, who wrote the excellent non-fiction book ‘Stasiland’, about numerous people’s experiences at the hands of the secret police in the GDR, the former East Germany. This novel also takes Germany as it’s primary setting, here though the time is the 1920s and 1930s, the days of hyperinflation, the Weimar Republic, the reaction in Germany to having lost WWI and the demands of the Treaty of Versailles on Germany, followed by the rise to power of the National Socialists led by Hitler. This period interests me very much as I studied modern German history at school and University. I have read a large number of excellent novels recently taking one or both World Wars as a backdrop, yet in dealing with refugees from Germany fighting against the new regime, this one covers very well something I knew very little about and brings a whole different aspect to light; one that I feel should be more widely known, and I hope it will become so through this inspiring novel’s many future readers.
Ruth Becker, her cousin Dora Fabian, left-wing playwright Ernst Toller, Hans Wesemann who Ruth marries, Mathilde Wurm and other characters play leading roles in a determined struggle to keep Germany from falling into Hitler’s control. When Hitler does gain power though, they flee and yet they strive to continue their resistance efforts, however much this endangers them, from their new locations, London being the main one. Whilst trying to maintain their determined struggle, they have to cope with trying to settle as refugees into another country with a different language, to learn who they can and cannot trust both within the establishment and those close around them, all the while fearing that betrayal and enemies may be concealed everywhere. Amongst the group themselves there is immense friendship, love and heartache, and great struggles whilst trying to remain undiscovered.
Ernst Toller fought for Germany in World War I, yet now he is banished and his works burned there. Now he is looking back and amending the manuscript for his autobiography, ‘I Was A German’, to include details of Dora’s life and his feelings for her. Dora is a determined, compelling and hugely courageous woman. Toller’s manuscript is sent to Ruth Becker, (whose real name is Ruth Blatt, and whom the author knew), who is now elderly and living in Australia, and this provokes her to recall all the memories from those years gone by. Ruth’s story is told in the first person, alternating with chapters where Toller tells his story in 1939, where he spends his time in a New York City hotel room dictating his thoughts to his secretary Clara. She herself has many anxieties regarding the impending war and its potentially devastating effects on her family.
I admire the characters so much for their attempts to expose the build up to war and fight the injustices being perpetrated by the Nazis. The writing is wonderful, the story so moving, and it is that much more engrossing and also filled with sadness because it is true, the author having taken the experiences of real people to create this novel. They existed, they fought these struggles, and they endured this terrible treatment, and still they persisted in trying to change things for the better for others in the future. It really makes you stop and think as a reader. The writer’s use of language is pitch perfect. The novel really made me think about how much some people fight in their lives, how much they can achieve, and what amazing events can lie hidden in each individual’s past. This is an intelligent, literary novel and I could see it being in serious contention for literary prizes in the coming year. Highly recommended.